Resting under a tree on a paddle to shore.
KARMA 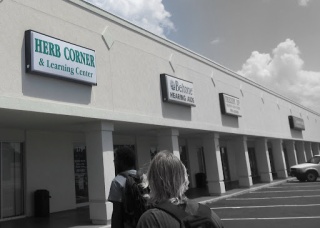 We walk into town for supplies with a gas can and some empty bookbags, and Femi says he’s never hitchhiked before and sticks out his thumb.  The first vehicle to pass, a truck, pulls over.  Haha! You gotta be kidding me.  This really nice, older, white guy says I wanna show you a picture of my grandkids.  They’re black and he says to Femi, “It’s about character not skin color, hop in the back.”  After he drops us off at Publix, he asks if he can wait until we are done shopping to bring us back.  We have to refuse the extra niceties.  Then he asks us if we need any money.  Nope, gotta deal with Karma in as small quantities as possible, especially when you’re in the red.
Sebastian is a really, really cool place.  (Thanks for the recommendation Paul)  We are anchored near a small island where Stephen and Femi found a couple conchs in their shells.  Not tasty.  We paddle to a resort/marina and hang out  all day in a bar with wifi.  Everytime we try to pay for a drink or food, the server would say, “Don’t worry about it, I took care of it already”.  We beg them to take the cash in our hands, but they just tell us to pay it forward.  Great, more Karma debt.  We’re gonna have to save a flock of baby dolphins from a burning school or something to make up for all of the help we’ve gotten along the journey.
STORM

So today, I wake up my bed in the V-berth (part of the cabin under the fore-deck) and listen to the chain on the deck as Steve pull up anchor.  It sounds somewhat similar to dropping a bag of aluminum cans on the roof of your car.  Femi starts the motor and we are off.  I stay in the cabin and relax for an hour as they navigate through narrow rivers to the next spot. 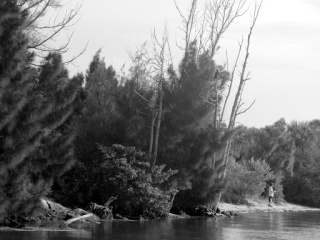 After a while, I go outside and do some stretching and Kung Fu workouts/techniques.  The boat is a great gym, especially when it’s moving through waves.  The sun is beaming (we have no bimini yet) so I tell Steve to go below where Femi is, and take the tiller.  Staying in the sun too long will drain you and kills the water supply.

The sun isn’t a problem for long because a storm is rolling in.  It starts raining and blowing.  “Steve! Turn on the weather!  Find out which way this thing’s moving!”

It starts getting kind of bad.  Shallow water and strong wind means choppy waves.  The channel is narrow and the wind is so strong, I can’t point down the channel, so I zag-zig.  At least we have rum this time J.

The rain/sleet is pelting my face to the point where I can’t look at the compass.  Luckily I had on some sunglasses gifted to me by our good friends Jarrod and Tina.  The GPS tells me where the channel markers are, but I have almost no control over the boat because of the wind and waves.  Femi reports back that the storm is moving NE.  Good, then I’m heading due South.

In about 15 minutes the storm is subsiding and a super low double rainbow appears as I pass a barge covered in earth and rock.  FSM smiles upon us once again and we wine and dine.

Up until this point, all the rivers from NY to FL have looked about the same murky, brown color.  The ocean gets clear, but not the rivers.  One of our awesome servers at Captain Hiram’s in Sebastian told us the river water changes color around Ft. Pierce.  Passing the inlet, there is a definitive line between the brown and teal, aqua blue water.  It’s so distinct, that you if swim in the water and half of your body looks like back home, and half in paradise.  We are wowed.

That afternoon, we anchor near the shore, a narrow strip of land between the ICW and the ocean.  After paddling the dingy 550 feet and tying it to a rock, we walk across the road to find a wall keeping us out of the private beach.

The beach is cut off by a newly developed property, so new in fact that there was nothing but For Sale signs on all of the lots, so we slip through a gap in the fence and enjoy an afternoon on an absolutely pristine and vacant beach.

Today we are heading to Jupiter, where Femi and I have packages being shipped to us (thanks Boots).

More sweet houses on streets of water.  I am meeting Jeff, a dude I met in Teepee Town when I stayed with Boompa and the Metis Indians in January.  I lost all of my contacts, and only have his address.  Hopefully he calls. 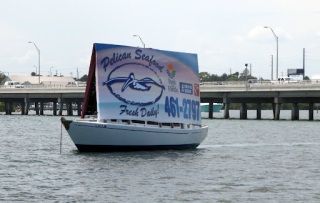 We pull up in a bay and dropped anchor.  Dubi jumps in the water!  This is only his second time swimming. 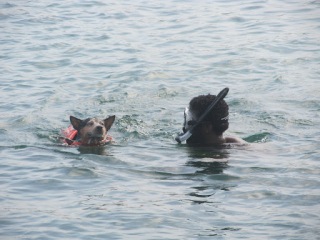 I find this little guy snorkling around the boat where we dropped the hook.  Think it’s a sea cucumber.  It’s weird enough that I don’t want to cook it.  We swim around all day and Jeff leaves me a voice mail.

He had my gift from Boots, too.
We go to dinner at a really nice, tropical themed restaurant where he works called Guanabanas.  Blackened mahi sandwich with melted Colby jack on top.  Jeff’s own creation.  All 4 of us order the exact same meal.  How often does that happen?  And conch fritters as an app.  The rest of the night we chill on the boat, drinking rum and beer and playing instruments.  Jeff brings a bunch of flutes and Irish whistles.

Need to clear up some false notions that may have been taken by the audience as a result of our highlight reel.  It’s not all sunshine and rainbows on the boat.  The most difficult challenges are all internal.  If the boat catches on fire and sinks, oh well.  Passenger survival is more important.   It’s just a boat and we can get a bus ticket to paradise. The hard stuff, which may or may not be apparent from reading the blog, is dealing with moods, attitude and balancing interpersonal relationships.
I can be in a bad mood for up to 2 days.  Just sour.  Whether it is illusions of grandeur, lack of progress, or growing friction with a crew member, it’s almost impossible to control.  Maybe after my neuron receptors get their fix on whatever chemical is associated with bad feelings or/and after enough time passes (I  get quiet and distant), then do I refocus on the bigger picture.  Then I go back to acknowledging good things like, “Hey I’ve got 2 legs, I’m pretty healthy, the world is a beautiful place filled with fun and interesting people.  Oh, yeah and I’m on a boat heading for paradise.
Einstein said ‘Weakness in attitude becomes weakness in character’.
Of course I write to you now in a good mood, because when I’m pissed, I only write depressing songs or look for something to improve.
I guess the summation of my thought train is: Not everything in life is a dick measuring contest.  Sometimes you gotta look around and realize how good you have it and keep balance by doing what you want.
I notice at the end of the day that tensions are building within the crew.  We all go to the store to get dinner and I forgot my wallet.  I don’t like to borrow money from friends, and already owe Femi for groceries, so I say I’ll just wait until tonight and eat back on the boat.  To some, my actions make no sense at all.  But it does to me.  I don’t like favors getting involved which will end up being leveraged one way or the other.  Anyway I think that either not borrowing money or just waiting until we were at the store to tell them put Femi in a bad mood and he hasn’t said 2 words the whole night.  He’s also had an occupied mind, because he may have to bus it back to GA to clear his old apartment out and sell his things.

This is the kind of activity that the crew undergoes daily.  There’s a big storm coming our way, Tropical Storm (projected to be a hurricane at landfall) Isaac, which will undoubtedly add to the tension.  Sometimes bad weather brings the crew closer together.  I need the crew in good morale when it comes time to make decisions that can affect the outcome of the trip.

Now the boat is in Riverwatch Marina in Stuart, FL.  We had to backtrack about 12 miles to find a marina to wait out the storm.  The boat is strapped down.  Ten total ½” dock lines with shock absorbers, pulling the boat to the middle of the slip with room to raise up about 5 feet in a storm surge.  We took off the genoa, mainsail, boom, and put everything in the cabin.  We are chilling at Jeff’s uncles house watching Terminator Salvation.  The bad weather is coming tonight.  Went to the beach and Jeff learned me some surfing.