Do us both a favor and put on some reading music.  Need a recommendation? YouTube full albums by Tycho or Satin Jackets. 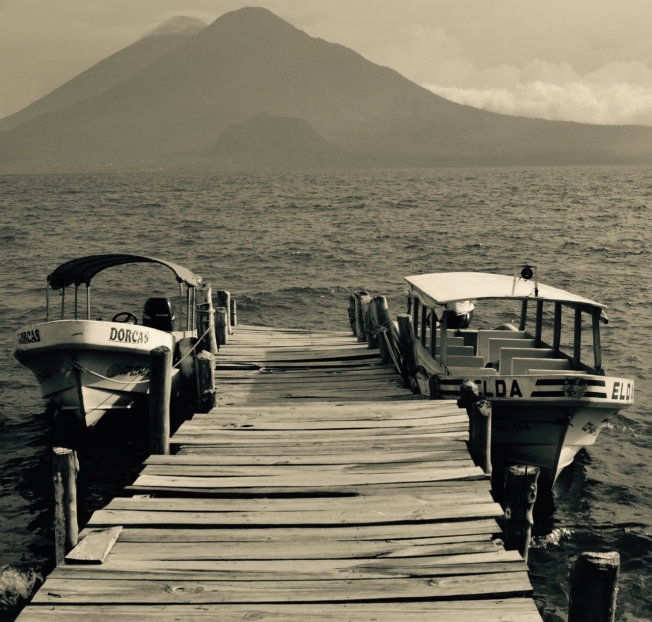 I THINK one of the most important things in life is celebrating the absolute unnecessary.  That’s why I like art.  My artist roommate in New York asked me once to describe art.  I said, “Useless” and I meant it in the way of a productive 9 to 5 worker.  She squealed with delight.  It may have been the most accurate and best compliment to her life.

When I write, edit photos, draw, build something, or play music, I quickly realize I have enough hours in the day.

Wanna give yourself a cheap gift? Grab the closest thing and start scribbling, drawing, balancing, juggling, doing, creating.  Keep it up for more than 60 seconds.  I know, some of you don’t have that kind of time just laying around.

Time: what an illogical yet mesmerizing concept. 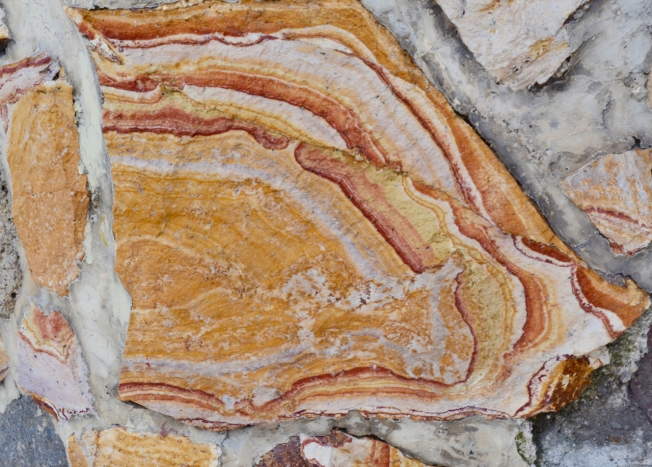 I like these times when I hear cavernous lungs carpeting a thumping heart.   The result is not nearly as important as getting lost in the process.

After writing this, the guilty burn of productive society’s glare is but a glowing ember in the pit of my stomach.  Now I can go across the street to eat crepes on the roof and look at Antigua’s volcanos.

From the Guanzi (old Chinese text):

When you enlarge your mind and let go of it,

When you relax your [qi 氣] vital breath and expand it,

When your body is calm and unmoving:

And you can maintain the One and discard the myriad disturbances.

You will see profit and not be enticed by it,

You will see harm and not be frightened by it.

Relaxed and unwound, yet acutely sensitive,

In solitude you delight in your own person.

This is called “revolving the vital breath”:

Your thoughts and deeds seem heavenly. 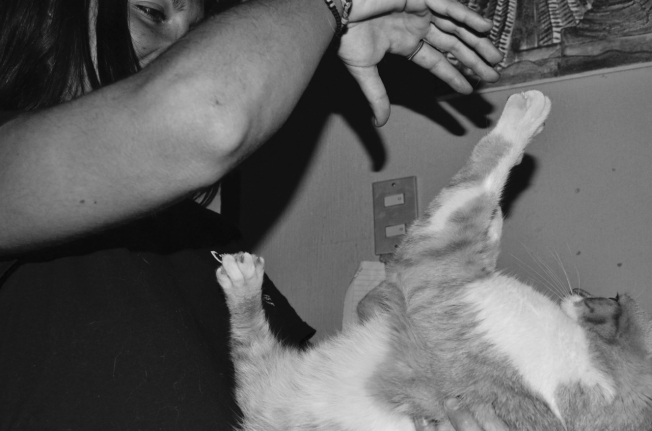 In two weeks of chaotic travel, I blew all of my available money with my good friend Danielle.  She just finished 3-1/2 months of solo travel from Panama to Guatemala.  Considering the dense beauty and the intense wilderness of the Central American hostel/party scene, that is not an easy amount of ground to cover in only 14 weeks.

we spent the first few days walking around Antigua

Three weeks later, I’m still cooking from this cornucopia, all for $7.

Avoiding awkwardness at home is the foundation of the restaurant industry.  “He is happiest, be he king or peasant, who finds peace in his home.” – Goethe 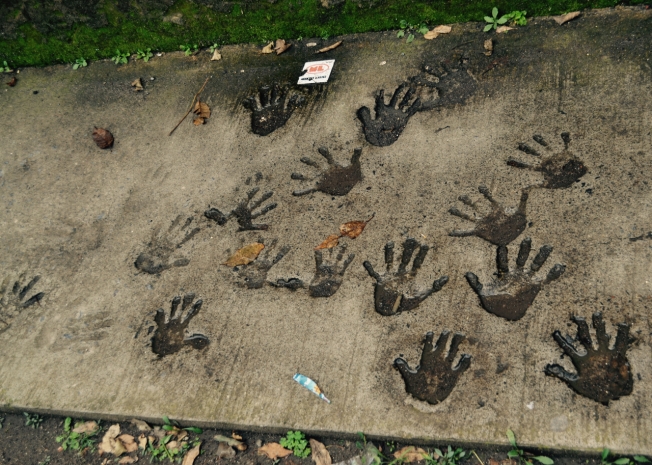 Being civilized means ignoring your instincts.  It means doing things in ways to minimize judgment by others.  Instead of living as if you are invisible, you try to go unnoticed.

Kung Fu and her new neighbor 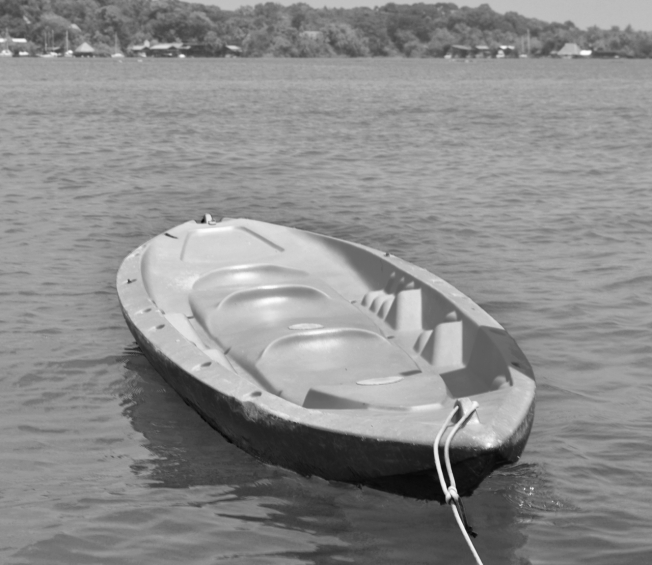 Even though it’s a b&w photo, what color would you guess? (Answer at the bottom) 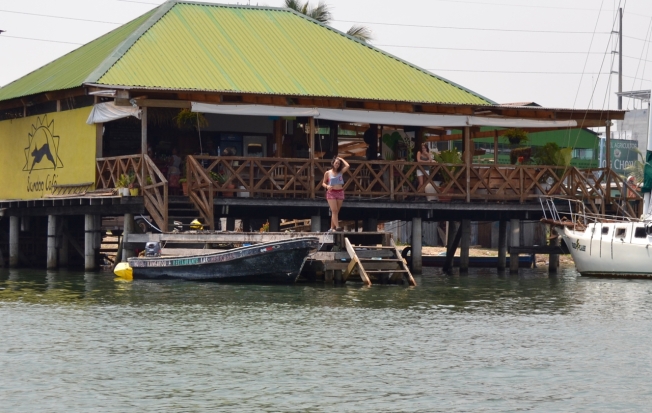 Danielle waiting for Steve and I to dinghy up to his favorite hangout.  This is the best pizza I’ve had in Central America, by far.

…where else would you hide a bat cave?

Rio Dulce is the most famous hurricane hole in the Carribean.  Steve has fulfilled his grand plan, over ten years in the making.

After a few days in Rio Dulce, the three of us go to Lake Atitlan.

Danielle jumping from the “trampoline” in the town of San Marcos 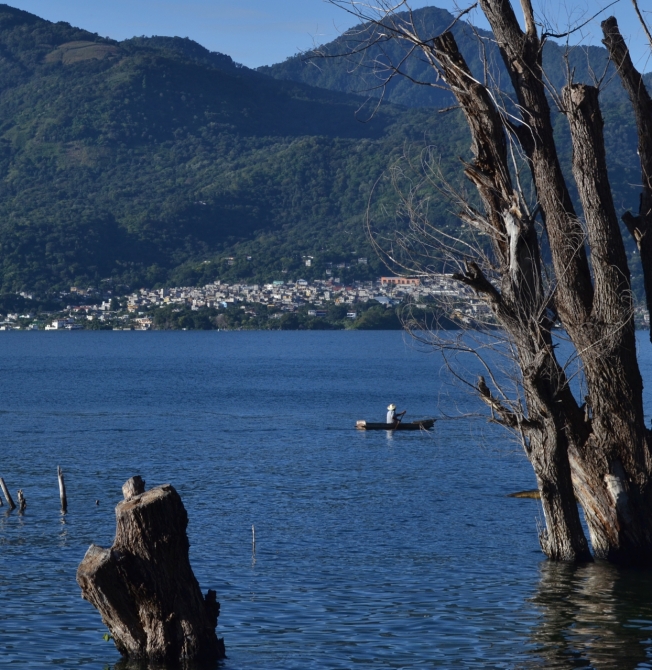 Across the lake is the party town of San Pedro.  Twelve towns named after Catholic saints surround the lake. 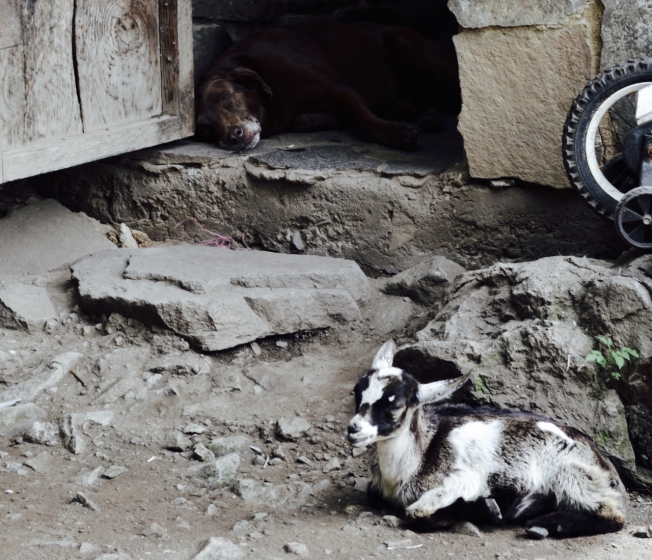 Find the endorphins without any help.  That’s called “Joy”, “Love”, and “Peace.”  Supposedly these don’t play by the yin-yang rules and have no opposites.

There are some forces that we don’t know about.  Don’t believe me?  Look at the last thousand years of scientific discoveries.

The hippie town of San Marcos so far has the strongest pull to Steve and I. 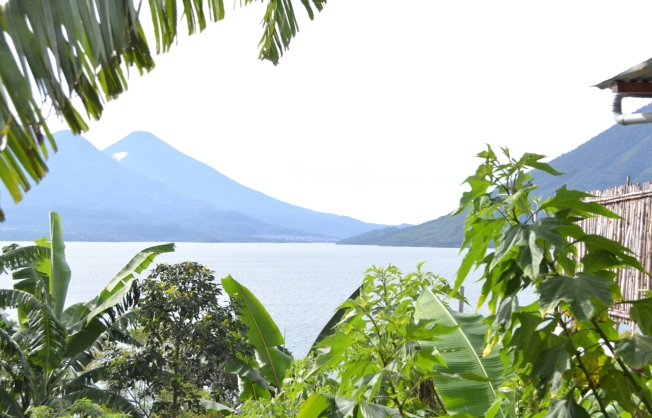 A view from the place where Oba and The Dubes are living. 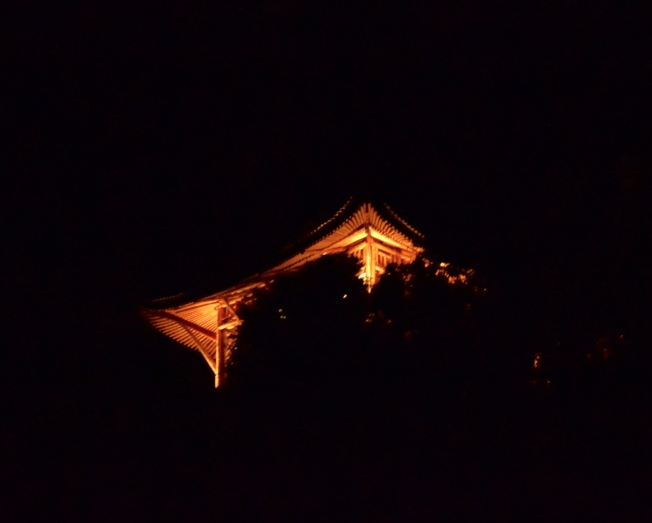 Of course there is a Taoist temple, too.

Her airport shuttle disappears down the cobblestone streets of Antigua, leaving me on the sidewalk in front of a convenience store.  I step into the tienda and break my last 5Q bill on a cheaply manufactured chocolate bar named after one of my favorite cities ( 6 points if you can guess the name in the comments) to punctuate my situation.  .  Time to get the ball rolling again because my current inertia is pointed straight down.

In other words, the last two weeks were perfect.

As I write this, taking deep breaths of the brisk breeze, the apartment’s soft and gangster cat, Lopez, sits next to me on the cozy futon.  We watch the banana tree sway in the sunny courtyard.  The back door opens each time the air pressure changes.  I could fix it, but…why?

Once you let go of the reigns of life and feel the wind sweep the sweat from your palms, you notice the horse actually knows more about the road than you. 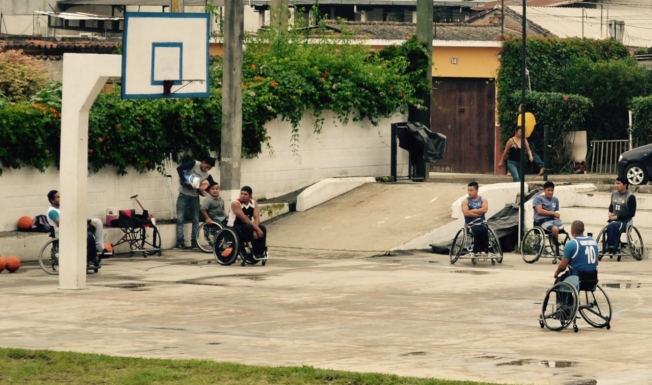 “Ain’t nuttin’ to it but to do it!” – a great quote from an old friend.  I use this to do gainers and other “dumb” things.  Aren’t they the dumbest, most useless things that make us stop in admiration?  At the rate I’m going, I’m going to be…what ever I want.  “There’s always time to become the person you want to be.” – another old gift that argues nurture vs. nature.

I spent a whopping ten minutes cutting and gluing magazine fragments to an unfolded piece of trash.  Some people call it a vision board. 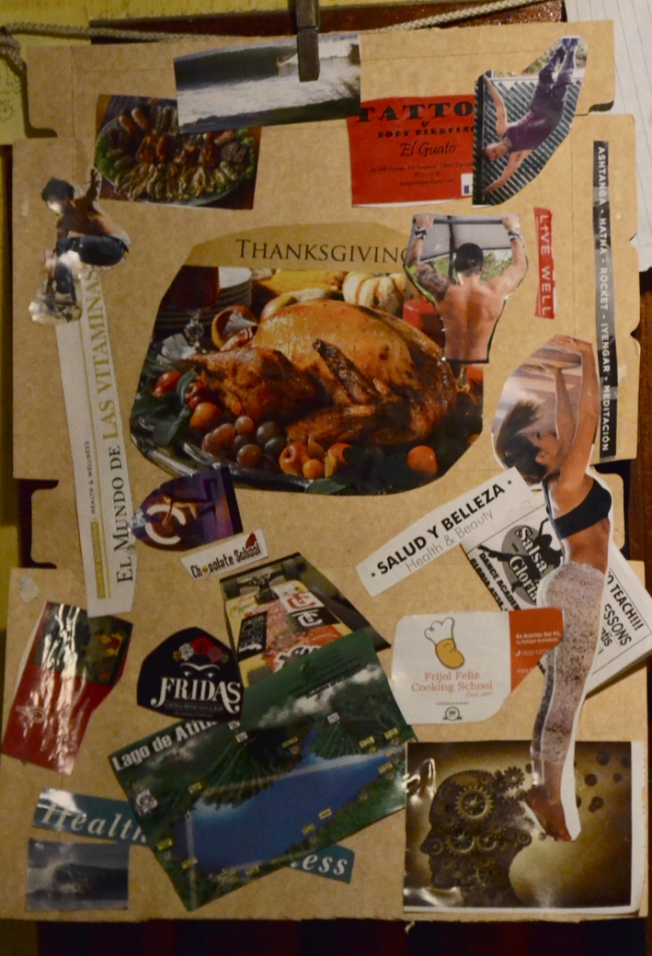 The next day my friend invited me to an organic farm to help with a promotion event in exchange for a bag of veggies.  Health and wellness.

One of the twin brothers running the farm invited me to use his welded outdoor workout gym. Calisthenics.

He said they have a big Thanksgiving dinner and that we should come. Look in the middle of the board.

They have a stage for daily stretching/exercise/dance where I was invited to be an instructor.  Yoga & Salsa on the right side.

He gave a tour of the farm and said we can come work once a month in exchange for more super foods.  El Mundo de las Vitaminas.

They are going to have weekly workshops to learn about chocolate, cooking, and a bunch of other do-it-yourself workshops. 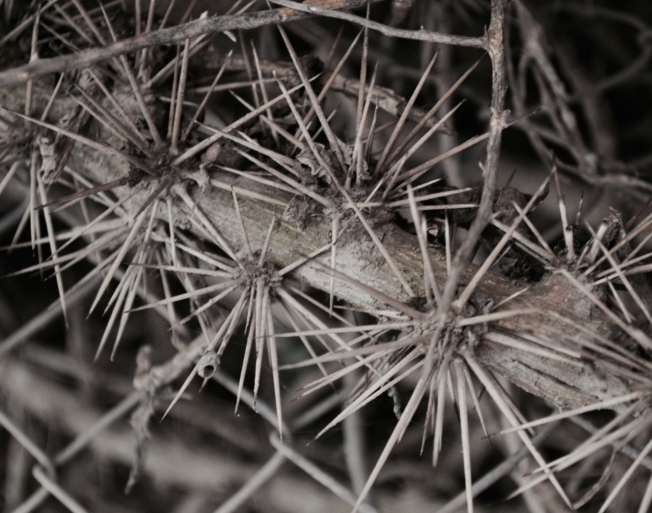 Note to self: Try to remember that you can’t be better at life than life.