PART I – Key West to Tennessee
—  While your subconscious has all of the information and knows exactly what to do in the present situation, your habitually formed conscious mind starts looking for reasons to stifle your urge.  Whether it be a hot chick that just walked by and your hive mind just conferred with hers or an inanimate object that you want to pick up because the energy signature resonating through the universe was just right, you talk yourself out of doing what your body and mind already know is correct and logical.  This is called rationalizing.  We are told it is a necessary defense mechanism, but I find it an inconvenient obstacle between me and what I really want.  It feels like a socialistic leech, draining my energy so that I’ll never be 100% free, happy, or complete.  The minor pains of finding out the hard way are vastly eclipsed by the blanket protection scam that ultimately enslaves you.  —
I tell Jeff, “I’m in.  We leave in 2 weeks.”  This was a week ago when we first left Miami.
I am helping Steve get settled in Key West for another week and then I’ll make my way up to Jupiter where Jeff lives.  We have some really good days and the mood stays at the tone of “Well, it’s been a hell of a trip.”
We need a job, because at the time we had an increasingly meager supply of Ramen left and no means of replenishing it.  After walking around the island for several hours in an attempt to clean someone’s boat for cash, I decided that insurance and fear would not allow fruition.  I needed a job job.  So the next morning, I walk into a restaurant that is under construction and ask to speak with the foreman.  He’ll be here at 8:00am.  Ok, I have a half hour to burn, so I look for something to do.  I help unload a truck full of fans and lights.  Someone directs me to the back to help scrape a floor.  A gentle giant with the name Big Brian becomes my immediate supervisor even though I don’t officially work there.  We are cleaning mortar and glue off of an old tile kitchen floor.  I don’t mind the work.  It’s better than walking around looking for work.  When the Mingo, owner of Mingo Construction, shows up, he asks me who I am.  “Hey, I was waiting to talk to you, but I’m not good at standing around, so I started helping people.  I want to work for you.”  Mingo tells me to keep doing what I’m doing and to fill out an application later. 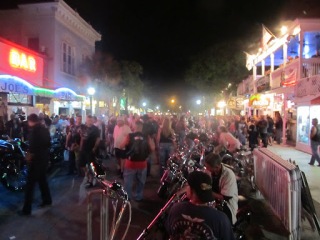 Later that evening, I receive a small sum of money in my account from an old pending transaction so we are good on cash until Steve gets paid.
This journey started as an opportunity that I couldn’t pass on.  Occasionally, everyone finds certain things where they just can’t help themselves.  It could be to briefly stop and watch an interview of their favorite athlete on a TV they are walking past.  Or a breakthrough in wireless technology that makes someone leave their teaching job to go do research.  Throughout my adolescent and adult life, I have spent so much time and effort on putting together travel expeditions, that when one is haphazardly put in my path, I have to drop everything and go.  If I didn’t, there would be a number of nights lying in bed wondering what my life could be like.

I don’t usually sleep the night before travelling and not until I am completely out of gas,  I think it is a survival thing which makes me gather information until the point of exhaustion. I hitch hiked and bussed up to Jupiter.  I know, it’s not safe and frowned upon by the authority.  It’s not really OK, but not illegal either.  I did my homework. 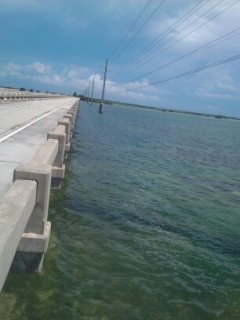 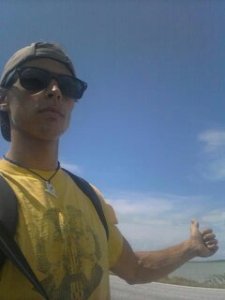 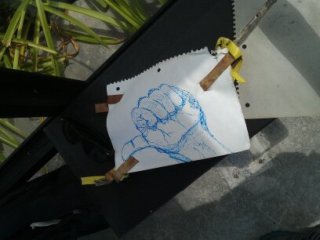 Buses are REALLY nice, compared to walking in the South Florida sun.

Code 316.130 (5)
No person shall stand in the portion of a roadway paved for vehicular traffic for the purpose of soliciting a ride, employment, or business from the occupant of any vehicle.

It seems like they are saying you can’t hitchhike, but this just says you can’t do it while standing in the middle of the road.  On the shoulder is fine and the 30 or 40 cops that passed me didn’t seem to mind.  It was highly unsuccessful as I got 2 rides in 5 hours for a whopping total of about 30 miles.  I walked about 15.  So I jumped on a bus and began an overnight trip through Miami and Palm Beach.  I meet Jeff about 24 hours after I started. 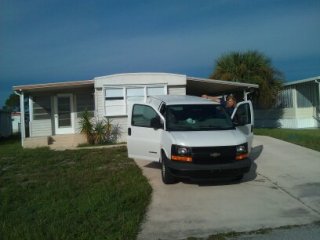 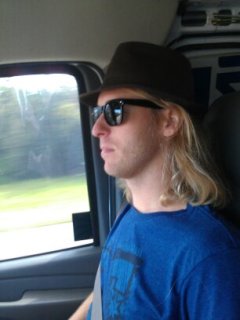 Jeff is a lot like me.  He has an opportunity to do something he’s been wanting to do for about 6 years.  He just closed on a house, and even though there is more work coming down the pipe, he has a window where he can responsibly take a leave of absence and road trip across the country.  His boss at his part-time job where he’s worked the last couple years told him to take his time and he’ll have a job when/if he comes back.  Who doesn’t want to drive cross country and see the landmarks and parts of the country that people rarely talk about?  There are places so underground, hipsters don’t even know it’s cool yet.

This is a Juicy Lucy.  Big A invented it, unfortunately after someone else named it.
My deepest thanks to the Adams Family for always treating me like part of the family.  Sorry Flow for not stopping back by like I said I would.  I’ll call soon.  Back to burgers.

You fold two patties around your toppings and crimp.

If you’ve never ridden a bicycle through downtown Savannah, put it on the list.  There’s a reason Sherman burned every city in his path except this one.

Mickey, we had a hell of a time.  Marcia, those green beans were exquisite.  Tell Doc thanks for the drinks and letting us jump off his boat.
We have a map.  We have a creeper van.  We have 8 to 10 thousand miles of nicely paved roads which we will use for our own selfish entertainment.  You are welcome to join us of course.  After saying hello to people in Savannah and grabbing another guitar, we drive to Atlanta to drop off a book on Tesla (thank you Molly) and say what’s up to White-dog.  Nostalgic feelings of love and hate tingle my upper spine as we weave through Atlanta’s crazy ass roads.  Memories everywhere I look.

There is something else I have to take care of while I’m here.  Something that’s been on the corner of my mental desk since July.  Unfortunately, sometimes you have to tackle tasks that are not of the light-hearted nature.  I’ve seen a couple of intense situations in my life, but in terms of depth and daunt, this undertaking is very serious:
Krispy Kreme vs. Sublime Donuts

Microsoft Word doesn’t even acknowledge Krispy Kreme as a valid word; that’s how old school it is.  Of course Dunkin Donuts was not even offered cheap seats tickets to this event mainly because they are a coffee shop that just happens to sell bottom shelf, dry, tasteless, pride-less, sad excuses for a pastry.  Everyone knows a 3-day-old Krispy Kreme is preferable to a fresh Dunkin.
While Krispy Kreme has some key flavors that have stood the test of time, Sublime maintains taste patents to current and ever growing cultural flavor manifestations.  Oreo, Butterfinger, Reese’s, and let’s not forget the Orange Dream Star.  Sublime Donuts is half tattoo parlor, half donut shop.  Where else can you see your local tatted up skin heads working at the break of dawn?  Their company mission statement is to be requested as someone’s last meal on Death Row.  If you think about it, that is the highest award in culinary arts.  The Orange Dream Star is note-worthy.  It deserves a platinum statue of the donut being held in the air by Cupid with Bob Barker and Chuck Norris reaching for it.
The bread is a little thick at Sublime, close to the consistency of Outback Steakhouse pumpernickel.  Krispy Kreme has it perfect, because I think donuts are a class of their own and should be baked as such.  Not like a Danish or cinnamon roll or Debbie cake, but like a donut.  When you bite into a Krispy Kreme, your brain doesn’t register that you are sinking your teeth through a doughy, crispy bread, it says, “mmmmmmm…donut…”  The flavor of the frosting matches the consistency of the entire food entity so that the sensation of taste and touch are muddled in a hazy fog of good feelings.
The chocolate frosting on a Custard filled KK glazed donut tastes like a slightly bitter candy that an old lady would give on Halloween that’s been in the back of her pantry since before the Cold War.  Don’t get me wrong, it’s good, I’m just trying to illustrate how old school the flavor is.  KK sticks to the basics and doesn’t bow down to the customer suggestion box unless it says, “Do whatever you want!”
Sublime is a little more alternative and because of its liberal nature, has discovered great new flavors.  The Orange Dream Star is a kick in the mouth, tangy, orange sensation of virulent freedom, filled with a smooth white cream that puts your buds on a magic marshmallow blanket and flies you through a drunken paradise where it rains feathers.  Really, it tastes good.
In summation I would put a KK regular frosted that has come straight off of the assembly line up against an Orange Dream Star.  They are each glorious in their own unique way, and reach an overall score of “Way better than anything else you have ever put in your unworthy mouth!”  If the Krispy Kremes are more than a day old, I’d have to give it to Sublime Donuts.  Next time you’re in Atlanta, check ‘em out.

—  Stress is there for the release?  Jeff and I ponder the idea that we stress ourselves out just so we can have a culmination and let it all out through rage or another powerful emotion.  Maybe the release has other health benefits.  —
After a night visiting Jeff’s friends in Greenville and Spartanburg, we drive through NC and the Smoky mountains to Boompa’s house.  He and Scott, an old co-worker are the last of the people we wanted to see, at least for a while.  Scott grills us some awesome brats and hooks us up with some movies on tape.  Perfect for driving through the desert because they are old westerns.  With no place to be and no one to see, the trip is really going to begin.  No plans other than drive North and then West.  In the morning we keep the sun on the right side of the van.  After noon, we keep it on the left.
—  This blog is taking waaaaaaaaaaaaaaay too long to put together.  I am open to suggestions.  I will explore switching to a different blog site that makes putting it together faster and better.  I literally spend at the minimum 6 hours per post, after all the writing is done and pictures are taken.  —

Apparently whining is a side effect of being back on land.