Here’s my grainy picture taken from my tablet.  Next time I’ll find a way to fit my good camera.

I am training to be a guide to take up groups to Acatanango Volcano.  After 5 hours of climbing uphill through the clouds to 3,400 meters, we have noodles and coffee, cooked on campfire.

The night grows dark, but there is not much light pollution from the 5 or 6 visible cities below.  Also visible is the silhouette of Volcán de Fuego and Volcán de Agua.  Agua is dormant.  Fuego is not.

Every twenty minutes or so there is a BOOM!! The sound is about 5 seconds behind the light which has already traversed the canyon and we look up to see the fireworks.  Red sparks the size of tool sheds shower the conical silhouette.  Sometimes it is just a poof of smoke.  Sometimes rivers and waves of liquid rock turn the top 1/3 of the volcano bright orange.

This volcano is also over 3,000 meters tall.  So one thousand meters or eleven football fields are covered with lava.

Behind Agua Volcano, fluffy clouds ignite in constant lightning.  There is an increasingly bright, glowing cloud which gives way to a full moon, fully illuminating the half of sky opposite of Fuego.  Still, the sky is clear, I can clearly see the Milky Way accompanied by the occasional shooting star.

As I write this, I hear cheering from the other campers.  I look up and see a massive plume of fire above Fuego.  The sound catches up a few seconds later with a massive boom.  Lava flows almost all the way to the bottom of the massive volcano, now glowing fully like a mountain of hot coals.

Fuego in the light.

The campsite and Agua. 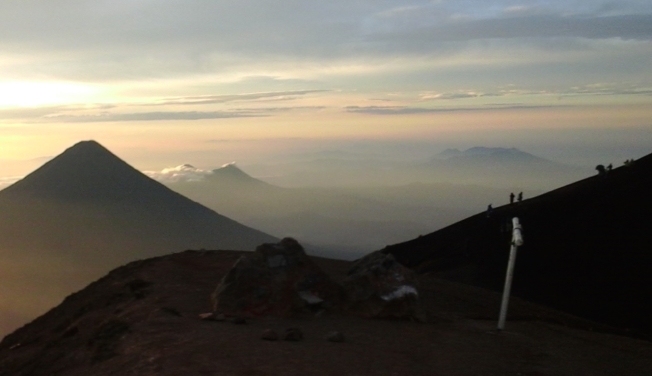 From on top of Acatenango.

It sits near the middle of the volcano chain, which is part of the Ring of Fire. 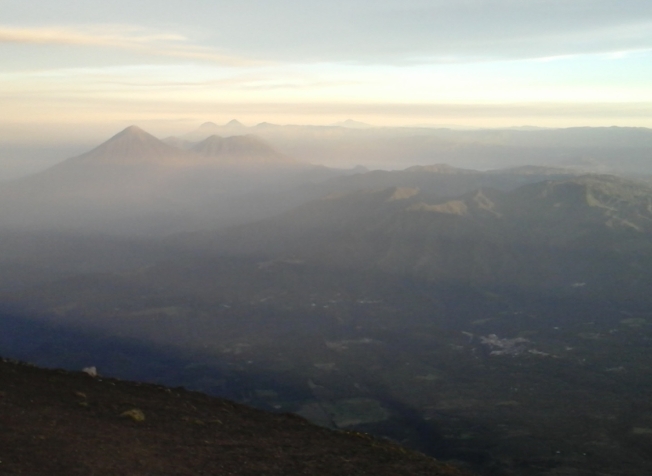 Grass growing on the side of Acatenango.

Very Dr. Seussical plantlife on the ash-fertilized soil.  That’s why the coffee is so complex and regarded so highly in Guatemala.

I am not a grinder.  Sometimes I wonder how I am ok with not making money for the future.  I would rather do what I want now than prepare for a future that I can only catch up to once or twice a week.  I guarantee if I’m not around next year, it won’t be because of money.  Don’t get me wrong, I like to work.  But some jobs pay better than others and some are more enjoyable.  I just rank constant enjoyment higher than potential enjoyment (money).

Then I found this audio clip:

Thanks Oba, for introducing me to Alan Watts.

Every path in life is the right one because it’s the only one you’re going to take.

To get off the human schedule is to be often alone.

“We seldom realize, for example that our most private thoughts and emotions are not actually our own. For we think in terms of languages and images which we did not invent, but which were given to us by our society.”

The reason we like looking at things that are obviously old is because there is a faint the sense of the thing in it’s prime. The same goes for visual textures. Our minds can feel the surface of what we are looking at even if it’s too far to reach. When a cat jumps on a ledge we detect the softness of the landing. It’s all our world. It’s all our reality. We are part of that reality. We follow the same rules. We didn’t have to learn the rules, they were already our instincts when we were born. If you can stop thinking about arguments and future anxieties and just look out, you can feel what you are seeing. Run your mind’s fingers over the shingles of a house you’re walking by. Look into the eyes of a passers-by and see their thoughts. You have the same thoughts. If you let yourself, you can see they are experiencing the exact same thing you are. It’s all part of the same game. It is all one game. All the parts are connected because they are all made of the same stuff. An unlimited supply of the same stuff that all started as the same stuff at the same time. The vastness of all the details of the universe is only matched by the complexity of our minds, which are both made of the same stuff, too.

It makes sense why, on relaxed days, I like to focus on all the little details. Pebbles, flowers, the breeze. I see the miracles like a child in a sandbox. Soap bubbles really are amazing.

On other days my mind is spinning through preparations and planning and comparing everything and everybody I encounter. When you believe things are unconnected, they can and will be compared. You don’t compare your hand to your foot. They are different, but they are part of the same body.

Today, with only 4-1/2 hours of sleep, I felt annoyed at the general public, which really just means I was annoyed with myself.  Some part of me was annoyed with the choices I made last night (I didn’t even have the excuse of being drunk).  All night my gut was telling me to go home, but I was babysitting a drunk person until 2:00AM, knowing I would have to get up at 7:00AM to hike a volcano.

The volcano trip was postponed and I wandered around in a fog of frustration, thinking about other bad choices I have been making like not being healthy enough.  This isn’t even the case.  Aside from about 30 espresso drinks and 15 fluffy pastries, my diet and exercise routine have been alright.  I’m not in shape to run a half marathon, but my joints and tissues are fairly free of stress buildup.  Aside from the lack of sleep, my life is pretty well balanced at the moment.

But I keep seeing my reflection in car windows and then scold myself for getting flabby.  I judge the younger people at my hostel for drinking cheap beer and doing exactly what I did a few years ago.  The only obvious variable is my lack of sleep.  All week I’ve felt fine and this is the first time I let me self undersleep.

I took a 3 hour nap and am now back to seeing things clearly.

I have a theory… or rather correlation of how not sleeping enough creates miserable yet consistent workers.  I don’t think it’s a grand conspiracy, rather an imbalance of time and money.  Sort of like bad diets and sugar crashes.  The more we work, the less time we have for money saving activities.  Once the see-saw tips, we slide down into a tired trap which can only be solved by either doing much less each day and going to sleep early, or by adjusting the over-working situation.

We play a game in the civilized world where the players see how little they can sleep and still function.  Ever been on vacation?  Happy vacationers sleep the full 9 hours their bodies crave.  Maybe we need so much because of our brain/body ratio.  From what I’ve read, the brain is 2% of our body weight and requires 25% of our body’s oxygen.  Gotta give it rest because, in one way or another, it controls our reality.  Treat it well and have a good reality.

Why do you think stoners are so chill?  They sleep enough.  Workaholics (historically me) are always tired and have volatile emotions.  Here’s a cool article about sleep:

This morning I had a coffee with peach aromas. I’ve been eating peaches from the mercado. I never buy peaches. At lunch my friend and I were talking philosophy and he said he could see I was in a new season and that he saw peaches. I hadn’t told him anything about peaches.  He didn’t know where it came from, it was really random.

I’m going to do some research this week and get back to you next week.  Any comments on peaches are welcome.