The other white dots in the sky are normal sized kites.

We are taught as kids that one thing is better than another. 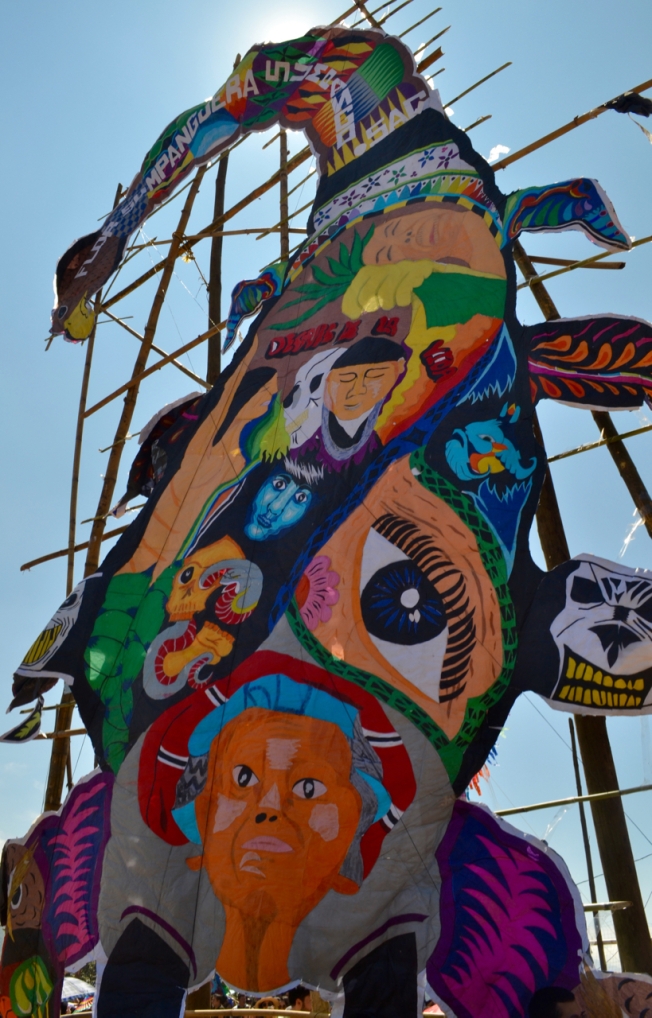 The 40-foot tall kites are just for decoration. 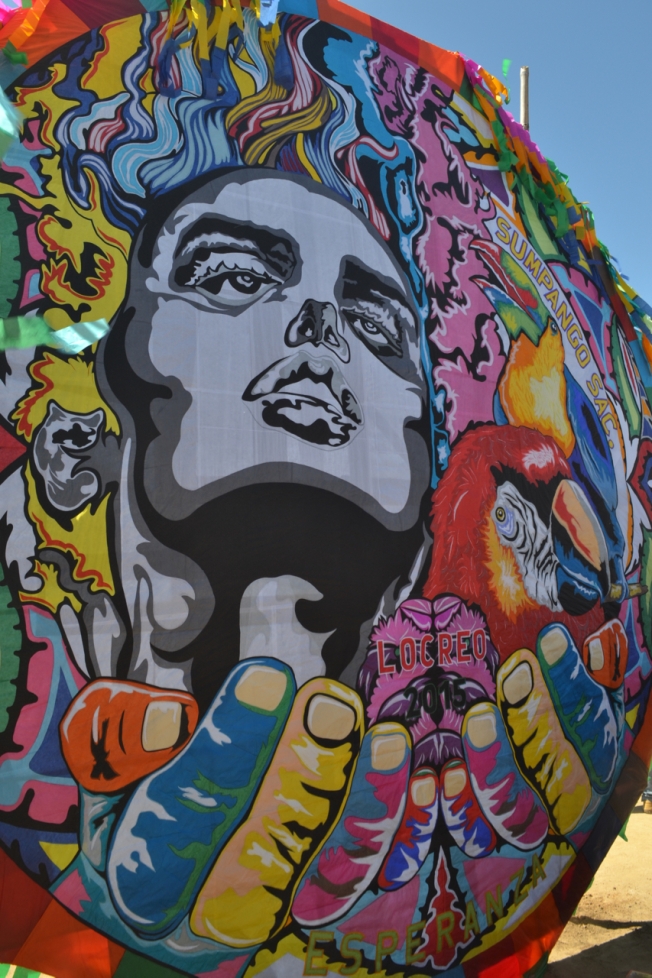 Before acid, flowers just smelled like flour to me.  I was always disappointed when I would stop to smell the roses.  Now I get all kinds of different scents and they smell great! 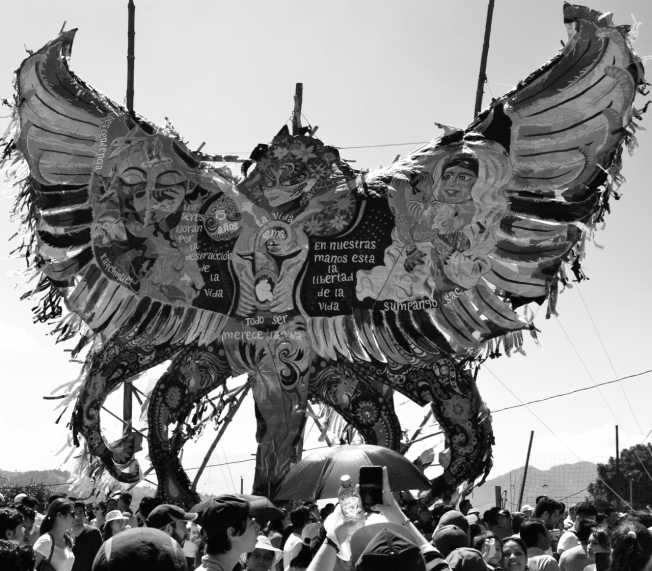 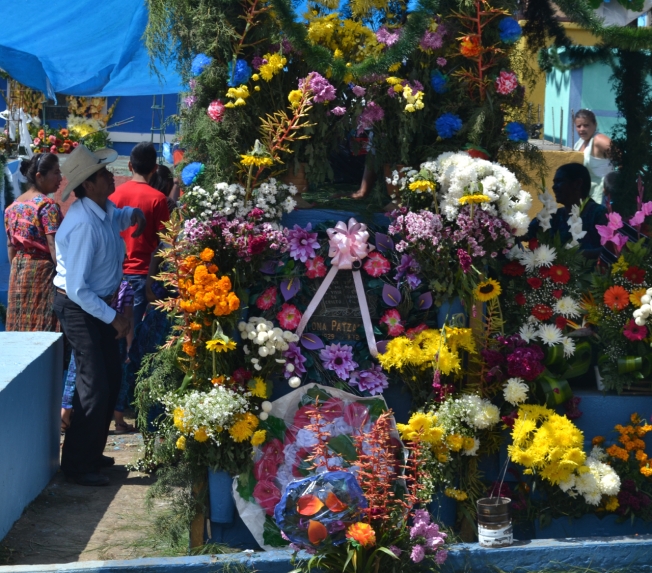 The Day of the Dead is a tradition used to celebrate the lives and assist the spiritual journeys of loved ones. 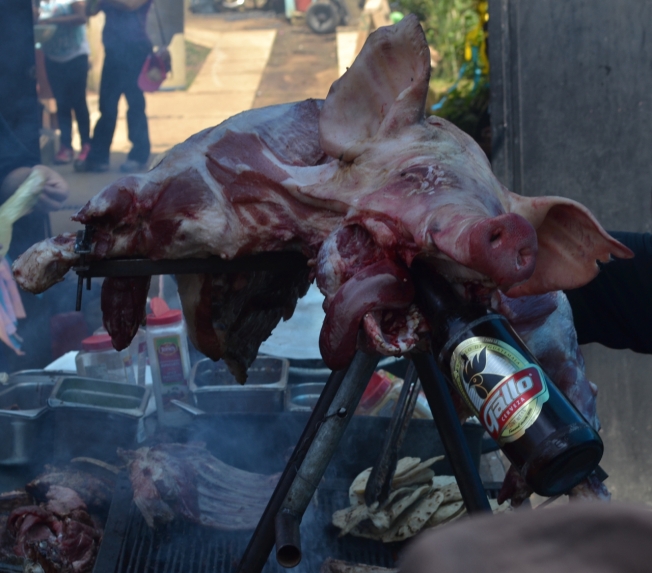 Eat food as if you are speaking a language.

Ringing silence of mosquitos in my brain

Fluffy and sharp, right on time

Breath in the to lack the walls 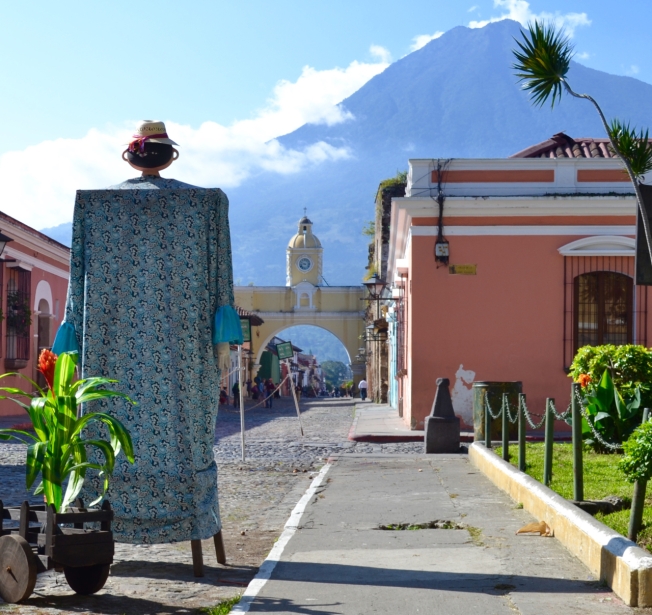 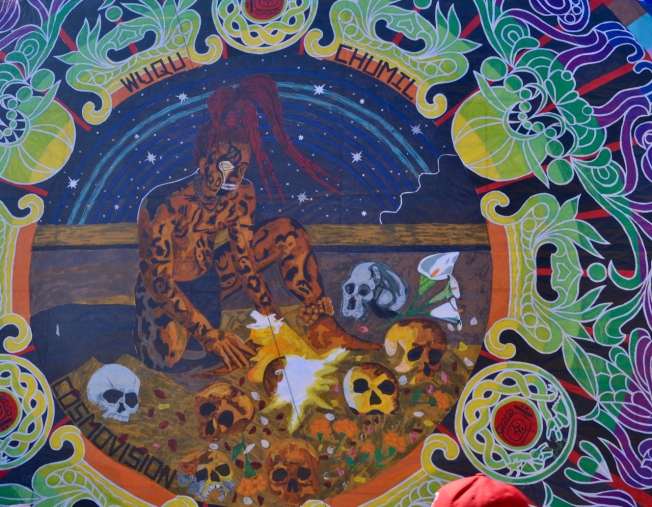 The Mayans had some pretty clever ideas.  After harvest, each pen is rotated.  Animals are where plants were and there’s even a “resting” pen.  This is key to “sustainable farming” or “permaculture”.  Mono-cropping, on the other hand, is a short sighted, efficient technique that depletes the soil of nutrients and offers limited protection against disease.  Disasters such as Ireland’s Great (Potato) Famine are the result.  Dense concrete jungles are also vulnerable to viral attacks due to lack of microorganism bio-diversity.  With plants, animals, bugs, and soil nearby, the local immune system is fortified.

“Every sound is born out of silence, dies back into silence, and during its life span is surrounded by silence.” – Eckhartt Tolle

Following their ancestors, Antigua’s Caoba Farms plant in spirals to match the shape of our galaxy.  This may seem whimsical and if I go into it too much, half of you will click the Facebook notification in the corner of your screen.  As a math/physics guy, it intrigues me so I’ll touch on it briefly.

In most of the world, we use a single calendar based on this solar system, particularly our relationship with our Sun.  If you Google  “how many stars are there?”, it says this:

That’s just what we can see.  Could it be possible that there is something else influencing our world?

Around the time of the 2012 excitement Guatemala was crawling with hippies, tourists, and archaeologists.  A local farmer and his twin brother decided to do their own research and see what they could learn about their ancient heritage.  Emilio, one of the twins, who I’m working with on farm tours, explained to me that the Mayans actually used 23 calendars.  Only one of these pertained to the physical world.  They didn’t want to focus all of their attention on material items lest they live for superficial motives.

The others were based on energy because the Mayans apparently believed all life and the universe were made of energy.  Picture an electron doing laps around a nucleus.  Or the moon and Earth around the Sun.  Or our solar system around the center of the Milky Way spiral, which I just learned is a “supermassive” black hole.  Yikes!

Here’s something to bring you back to the present moment: 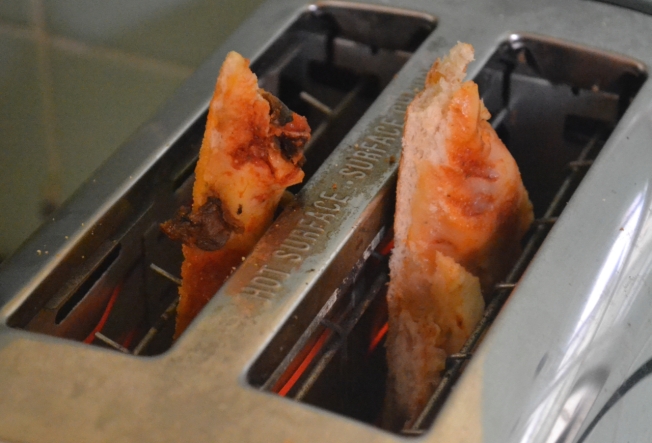 “I don’t know man.  I just think it’s important to always try to be self-aware and self-correcting.” – Ben Hurst 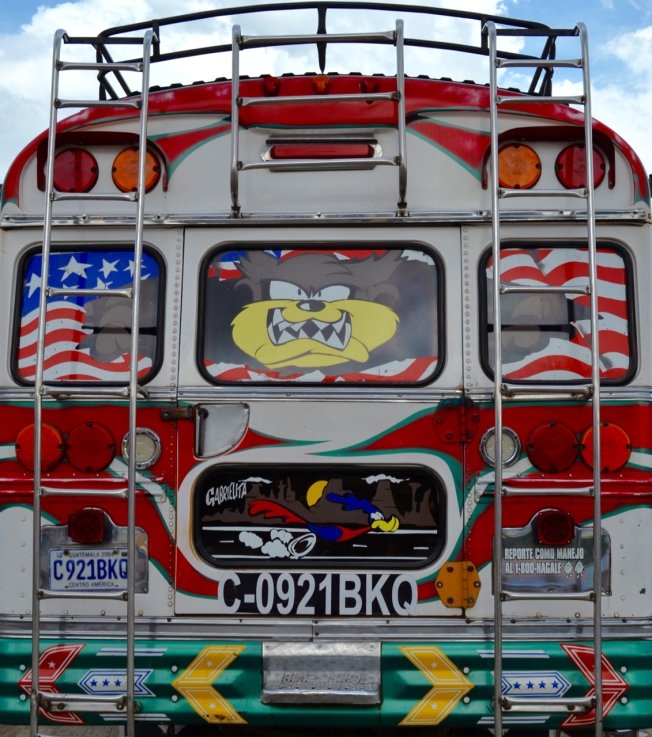 So I’m riding a chicken bus back from Mexico for my 3-month visa renewal.  The guy who manages the money is wearing an authentic smile and a soaked t-shirt.  It’s not raining.

At first it looks like there’s no room.  Even the front steps are full.  Following the assistant’s instruction, I SQUEEZE to the middle of the refurbished school bus.  My bag is on the storage rack, so I did not capture the amazing, everyday feats that were about to take place.

There are 3 adults in each of the 24 bench seats (built for two children), plus a FULL aisle of standing passengers.  I’m comfortably sandwiched between at least 4 people.  This must be similar to India, except there are no children in the overhead luggage compartments and no small crowd sitting on top of the bus.

A packed bus is no obstacle for the assistant.  After taking bus fare from those in arm’s reach, he asks a young passenger to slide down the window.  Grabbing the overhead luggage rack, he neatly slips both feet, hips, and shoulders out of the bus, which is traveling through the mountains at about 45 miles an hour.  (A week before, my brother and I were trying to figure out how the driver was able to squeal tires around every turn without flipping.)  Ten seconds later I see him standing in the back of bus collecting money.  Using the seat backs as steps, he duck-walks to the center of the bus, collecting money before he Houdini’s through another window and reappears at the front of the bus.

Since Central America is still “developing”, they don’t yet have rampant lawsuits, so people are still allowed to make their own judgements when it comes to personal safety.  One downside of an underdeveloped law system is the labor force is abused and the cost of living is significantly higher than the minimum wage. 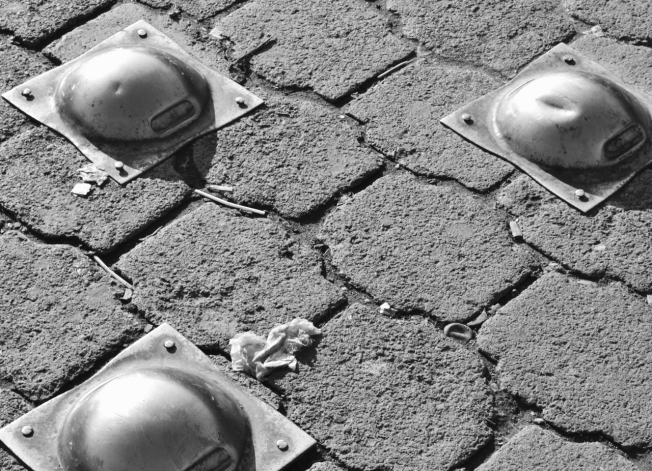 Money is a tool that is over used.  It’s like carrying a screwdriver around to open doors, write notes, get people’s attention, start your car, flip pancakes, scramble your eggs, eat your breakfast, and pet your dog with.

ECONOMICS: “Developed” VS. Developing (and tangents)

From time to time the discussion comes up about the differences between the economies of the U.S. and Central America.  After pondering, reading, and discussing with a variety of world citizens, I’ve come to a common denominator.

Latinos live in the moment.  Gringos live in the future and the past.  Keep in mind that this is a spectrum and I’m discussing the stereotypes to help contrast.

When you live in the future, you are more prone to make responsible decisions, plan effectively, and be motivated to address your scheduled priorities.

When you live in the present, you make decisions based on what is occurring around you.

This is one reason travelers gravitate toward Latin America.  Travelers, by definition, are inconsistent.  They like to put themselves in situations where it is necessary to pay close attention to their surroundings.  They also value experiential quality over financial growth.

As a traveler, I perceive benefit in surrounding myself with people who are more focused on what is happening now.  This is one reason I prefer the service industry to the construction industry.

The way Latinos deal with “stressful” situations inspires me.  When road construction consumes a sidewalk, pedestrians weave in with cars and no horns are honked except a quick beep to say “Hola!” to a passing tuk-tuk driver.  The tension of judgment is simply absent.  People just adapt, because that is how the body functions.

The body only reacts if something is actually happening: fire, dog bites, cold rain, being hit, etc.

The mind calculates, forecasts, recalls, extrapolates, exaggerates, rationalizes, and replays scenarios which may or may not have even happened.

The mind tells the body it is angry, jealous, resentful, sad, anxious, annoyed, and a bunch of other dis-eases, both future (fear) and past (pain).  If you stop to notice, each of these emotions are tied to a physical reaction of the body.  The next time you have negative thoughts, check out your body and see if you are tense somewhere.

There are also feelings reminiscence and excitement, which in excess show discontent with the present moment.

The future and past (and mind) are tools for deciding how to address the present.  If you catch yourself drifting off into thought, you can say to yourself, “I don’t need to use that right now.”

The point is that if you live in the moment (the latino stereotype) you may not have a luxurious lifestyle, but you are also not a stressed-out space cadet.

A quick glance at a developed economy seems like all sunshine and rainbows, and could be, except most of its citizens are missing the show because they are too busy planning for a rainy day.  Want proof?  Watch a crowded sidewalk or grocery store and see how many people are actually there.

If any of that psychological mumbo-jumbo intrigues you, you can get a healthy dose from the book The Power of Now by Eckhart Tolle.  It makes sense to me, but gets quite dense after the first 1/3 of the book.

If children just arrived from a different, non-physical world, then things like bubbles would be very entertaining.